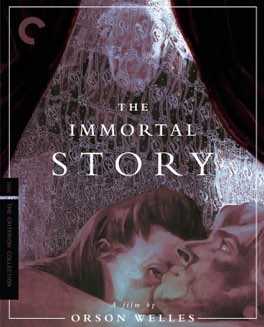 Not a masterpiece, but still very enjoyable. It’s exactly the right length for the issues it’s exploring, and makes for a pleasant thinker.

Perhaps what I love most about Orson Welles, is how intent he is on exploring the nature of truth.

No matter how conventional the story might initial appear, a Welles film always has something up its sleeve. He doesn’t do basic concepts like obvious good and obvious bad. His characters are deeper, his ideas are deeper, and his motivations are deeper.

Even this, which is about as on the nose as he gets, still has layers of thought to it.

This is a short film, with a deceptively simple story. A reviled businessman, near the end of his life, learns that the one true story he’s ever heard is actually a myth. It involves a rich merchant paying a young sailor to impregnate his wife for him.

After his aide informs him that it’s nothing but a common legend told by sailors at sea, he decides he will make the story come true. He picks a random sailor, finds a woman to pretend to be his young bride, and convinces himself that he will create at least one man in the world who can honestly tell this well worn fable.

The catch there is obvious. The story is still not true. While it’s true that the sailor would believe he was hired for this purpose, the entire thing was actually staged. The question is whether that matters. If the sailor believes he has experienced something, is that good enough?

The nature of experience is multi-varied by default anyway; no one event is ever perceived the same by everyone involved. What if the sailor never repeats the story? Has the old man still achieved his goal, simply by convincing the sailor this happened.

What if the sailor knows it’s a ruse and never says anything? Then it’s the old man who will believe his task is done.

These are fun things to think about, but they are less theoretical to me than they used to be. We are increasingly living in a world where people don’t just have their own ideas, they have their own facts.

What was an interesting philosophical discussion is quickly becoming a real world problem. As people are more and more entrenched in their beliefs, and less open to debate, it’s becoming harder and harder to arrive at a shared notion of truth. It’s one thing to enjoy this sort of philosophical pondering in the abstract, it’s quite another to see it playing out disastrously in every day life.

I don’t have an answer to this problem. If I did I’d be doing something about it. I do wonder though, what the world would be like if more people were exposed to art like this at a young age.

If we all were more aware of the limitations of the perception devices we rely on, would we be more likely not to assume so many things? Would we have more empathy and understanding of the different perceptions of others? I’m glad films like this exist, to provoke these thoughts, even if they’re getting scarier to have. - Dec 8th, 2016