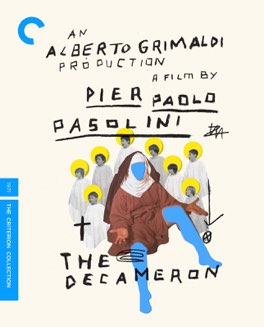 This is my first Pasolini and, so far, he feels like an interesting combination of Fellini and Fassbinder. Whether that notion survives a second film remains to be seen.

One of the perils of watching films in whatever order you choose, is sometimes you’re lacking the proper context to understand them.

For purely commercial directors this is likely not such a big deal, but it most certainly can be for auteurs. Without knowing where a filmmaker was in their journey, it can be very difficult to figure out what they were trying to say.

This is one of those situations. This is the first film by Pier Paolo Pasolini I’ve seen, and without doing some reading I would have found this to be a perfectly serviceable snack, but hardly much more than that.

The film follows these stories without the framing device of the original novellas, but rather just by wandering through them as they go. Most of the film takes place in Naples, and we move from characters to characters, never lingering long after a tale has run its course.

If the summary I just provided is all I knew about this film, I’m not sure I’d have much to say about it. It’s a perfectly pleasant thing, but there really isn’t much more there, at least not on the surface.

Luckily, each of these films comes with an essay providing some context. Through that essay, I learned Pasolini’s previous work was focused on modern life in mid-century Italy, and he was mostly concerned with the hopelessness of everything.

This film, and the other two in the trilogy, were an attempt to go back before capitalism, to a time he felt was better for living.

I’m not interested in trying to separate my current reality from my experience watching these films. I’m instead concerned with what a particular film makes me think about, at the time I happened to watch it.

From that perspective, this was a particularly motivating moment to have seen this. Pasolini’s impulse makes sense to me. It’s common nature to remember the past as being something like a golden age. There’s always some group of people, in every place I’ve ever been, who will tell you how much better everything “used to be.”

We’re currently being told a version of this in my country. The idea is that we need to return to some imagined past, in order to make our future great. It’s an idea I can emotionally understand the appeal of.

The problem, is that it’s based on an almost totally fairy tale version of our own history. If you think deeper about any point in our timeline before now, it’s obvious why, for the vast majority of people, it would be an atrocity to go back.

Our job is to fight to continue improving the world, not resetting to some previous point, a point that was, at best, only better for a very small portion of society. - Dec 23rd, 2016