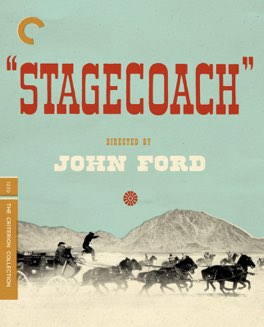 This movie made me smile, many times, and I can’t think of a better compliment than that.

What a film! What an incredible and remarkable film! It’s a film of firsts for John Ford; his first western, the first time he shot in Utah’s incredible Monument Valley, and the first time he employed John Wayne. Much like Akira Kurosawa and Toshiro Mifune with Samurai films, Ford and Wayne define the western genre. They made so many wonderful films together and this was quite a way to start.

John Wayne is definitely the standout here, but the other actors do great jobs as well. Late 30’s Hollywood was full of overdramatic character actors and this film is certainly no exception. Sometimes that can be distracting but here it works perfectly. The various characters in the story are all basically archetypes anyway and there’s plenty of comedy to be found in the secondary roles, especially that of Thomas Mitchell as the drunk Doc Boone.

As I said, all the actors do a fine job but John Wayne absolutely steals the show. He’s just so damn cool. He’s young here, well dressed, and incredibly charismatic. He always seems to have the perfect line, delivered just so, and he drives the film forward. He’s so full of life and coolness he’s basically bursting out of the screen. Especially wonderful are his scenes with Claire Trevor, they have a great chemistry with each other that allows his charm to fully come through.

Monument Valley, which John Ford would use for basically all his western films, looks stunning, even in black and white. It’s an incredibly potent backdrop, giving the whole thing a cinematic quality it wouldn’t have had on the backlot sets of the day. But even when the production does head indoors, it’s still full of basically perfect sets.

The basic story, of a stagecoach trying to make it safely through Apache dominated country, isn’t all that special, but it doesn’t have to be. The characters, the situations, and the drama are all laid out so perfectly that it doesn’t really matter. It’s a gripping film, grabbing viewer attention early and not letting it go until the very end. Young Mr. Lincoln was the first John Ford movie I watched, and it’s good, but this is something else entirely. - Mar 16th, 2014