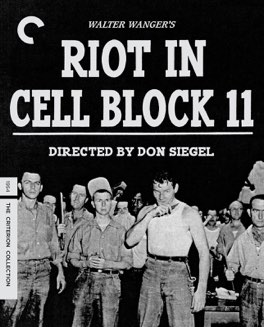 An unbelievably captivating film, on a deadly serious subject, that’s still extremely relevant today. It was incredible to see a statement this strong about this issue from this era.

This film completely blew me away. As someone who has spent a lot of time thinking about the corruption and inhumanity of the American prison system, to see a film make the same points in 1954 is absolutely astonishing.

The film came about because of the experiences its producer, Walter Wanger, had while serving a jail sentence for shooting a man he thought was having an affair with his wife. Even in a minimum security prison, and only for four months, he was so appalled by the treatment of the inmates that he decided to use his influence as a Hollywood producer to say something about it when he got out.

The film he ultimately help make is powerful and intense, full of strong performances and a captivating story. The points it makes are perhaps not new to someone alive now, but they must have been mind-expanding to anyone who saw it at the time, and they definitely still apply today.

The story starts with three inmates from the extra-security cell block 11 breaking out and taking several guards, or “screws”, hostage. They immediately free the rest of the inmates on the block and let the warden know their demands. He’s a liberal sort of man, which was something that really surprised me. We don’t often see anyone like that these days.

Our films have gotten so rah rah authority that it would be shocking to have a person in a position of power today openly talk about how they share the feelings of these inmates, and that they’ve been trying to get the same changes made for years. Still, the warden isn’t about to just give in to the demands of prisoners holding hostages, and a state senator shows up as well whose much more in the typical conservative bent I’m used to seeing.

Eventually several other cell blocks also decide to riot, and in the ensuing craziness cell block 11 gets five more guards as hostages. Slowly we learn what the inmates demands are, and things begin to get complicated inside the cell block as different factions start to vie for power. The whole thing comes to quite a somber and realistic ending, something that I also didn’t expect.

There were several things about this film that really caught my attention. One was the realism of the entire piece. They filmed it in Folsom Prison, using actual inmates and guards as extras. I don’t know if it’s because of that, or because the filmmakers were just great, but the whole thing feels almost like a documentary instead of a narrative film.

These characters, from the guards, to the inmates, to the warden and the other officials, to the press, all seem incredibly real. That realism extends through the entire film; especially to the commentary that the film is making about the prison system in general and the relative merits of what the inmates are trying to accomplish. The guilt or innocence of the inmates we are following is never considered or revealed, which is an especially effective tactic to not turn this into any kind of morality play.

In fact, the inmates aren’t even trying to escape, they are simply trying to turn the prison into what it’s supposedly meant to be; a rehabilitation and punishment center. Their demands are hardly unreasonable, things like access to work and job training, or more sunlight and no leg irons.

These are men who have, for the most part, accepted their lot in life and are simply trying to be treated like people instead of animals.

The film doesn’t moralize at all. The warden clearly supports the goals of these men, and he thinks that these kinds of riots are caused by the lack of basic humanity in the prison. At one point he even blames the public for creating the conditions that allow these riots to happen. The state senator, on the other hand, thinks these are essentially psychotic animals who deserve to be treated as such. And, while the film itself definitely sides with the warden, it’s also made quite clear how dangerous this situation really is.

It was fascinating to me to see that things haven’t really changed that much in the 60 years since this film came out. Apparently there were quite a few actual riots at prisons during this era, this one was based on the events of a riot in Jackson, Michigan, a few years before the film was made.

All of these riots had the same goals in mind, for the people we incarcerate in this country to be treated like the human beings they are, instead of like a money-making blight to be corralled and then forgotten. The United States has the largest per-capita percentage of its adult citizens in prison, many of whom are there for non-violent crimes. Their treatment and chances at rehabilitation should, therefore, be of huge concern to the rest of us.

This film showed me a powerful message about what that situation is really like, and what can be done about it. And it did it in an exciting and thrilling way, something that’s not easy to do when you’re also trying to make a point. - Sep 21st, 2014