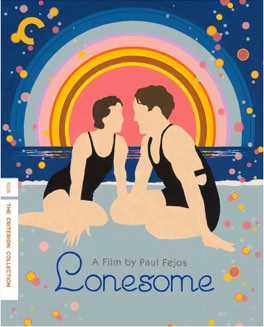 An inventive film from the very end of the silent era. Absolutely worthwhile as a historical artifact, but actually a great deal more fun than that as well.

This is a lovely little film about the trials of being alone in the city.

It’s an interesting thing to feel alone when you live somewhere surrounded by people, but the film does a great job of pointing out how hard that can be. It’s a visually stunning film, especially for its age. It’s an absolute treasure trove of interesting forward-thinking cinema techniques, like the many hand colored shots in the second half. And it perfectly, and awkwardly, straddles the line that separated silent films and sound.

It was made just as that transition was happening and features a mostly silent story but with three random, and hilariously stilted, talking scenes thrown in at the last minute. This film would be worthwhile if it was only an interesting portal into the distant past, but it does much more than that. It’s a truly lovely film, one that made me repeatedly smile.

The story is fairly simple, with the film taking its time to tell things without rushing. We start with a typical morning in New York City, or any city really, and with two people who are waking up for work. The woman, Mary, wakes up leisurely and starts her day with ease. The man, Jim, on the other hand, has slept through his alarm and must now comically rush his way out the door.

Both manage to make it to work on time and then we are treated to a montage of a half-day in each of their respective jobs. Jim is some kind of mechanical worker who punches holes in metal. Mary is a telephone operator. At one they are let out of work for a holiday. Each of them has invitations from friends, but they would be tagging along with couples and so they politely decline.

Heading home they each separately discover that a giant fair is happening on Coney Island, and each decides to head down to see it. While there they finally meet, with Jim instantly falling for the delightful Mary. He eventually wins her over, and they spend the entire day in each others company, becoming more and more enamored with one another.

Eventually they are separated by the insanity of the crowd, and by an overzealous policeman, and must struggle to find each other again in the lonely and crowded city.

This film’s central point, that it’s almost unbearable to be alone, especially when surrounded by a million other people, is a very interesting one. Certainly there have been times in my life that I wanted to be alone, but I tend to agree with director Paul Fejos that it’s much nicer to have someone to share your life with.

The fine nature of the point is the interesting part though, the idea that you can be intensely lonely, even though you are constantly surrounded by other people. This is something I’ve experienced a lot of in my life. There’s something incredibly difficult about being surrounded by people who seem to be connecting with everyone around them, and finding yourself unable to do so for whatever reason.

In my case it was mostly a struggle as a younger person to find people that I wanted to connect with at all. I grew up in areas that were full of people that I shared almost nothing in common with, and it wasn’t until late high school that I started to figure out how to get to the places that had the people I wanted to be around.

Even though I was surrounded by people before that, I was essentially alone, and it was indeed very hard. It’s a wonderful thing to find people who change that for you, and it must feel terrifying to find and lose that so suddenly, as Jim does here.

I’ve also lived through a day like this one, and they are wonderful.

We’ve probably all had days like these actually, one of those times where the day you end up having is so much more magical and perfect than you ever could have predicted when you woke up. In fact, days like this one occur almost exclusively when I have absolutely no idea that anything awesome is about to happen at all.

You end up accidentally stumbling on something, or someone, and end up someplace completely amazing. There’s something so incredible about the combination of meeting someone unexpected, and being together for something equally great. It’s really why I bothered leaving my house at all through some very unpleasant periods, that vague chance that something worthwhile would come of it.

I suppose that’s, ultimately, one definition for hope. We may be lonely, we may not have found our niche or our people, but we keep heading out and hoping that maybe today will be different. That today is that day we’ll miraculously put all the pieces together, if even only for that one day, and find something great out there in the midst of all that chaos and life.

This film captured that magic perfectly and that’s why I enjoyed it so much. - Oct 19th, 2014