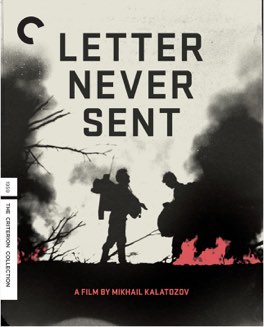 A marvelously gorgeous film that also managed to expose me to a new perspective on this period in the history of the Soviet Union. Unbelievably well made and impressive, I highly recommend this film to anyone who likes looking at incredible things.

The only film that I’d previously seen by director Mikhail Kalatozov and cinematographer Sergey Urusevsky is the incredibly beautiful I Am Cuba. That film, which is a series of four vignettes about the Castro-Guevara revolution in Cuba, is an almost pure exercise in propaganda. It’s an absolutely stunning film but it’s hard to watch at times because it’s so blatantly attempting to convince the viewer of the righteousness of the cause. Based on that film I didn’t really have any idea of what to expect here, but what I got absolutely stunned me. This is a film that has all the beauty and power of I Am Cuba, but with almost none of the burden of propaganda. What we’re left with is one of the most spectacularly shot films I’ve ever seen, full of moments that I cannot fathom how they achieved in 1959. It’s seriously unreal how amazing it looks; from the first shot to the last it’s full of the most striking visuals I’ve seen in a really long time. This film is an absolute visual masterpiece.

The story is a lot less developed than the camera work, but it’s still pretty good. The film follows a team of four adventurers, three men and lady, who have been flown to Siberia in order to look for possible diamond deposits. Soviet scientists have apparently concluded that Siberia is geologically similar to South America, and thus there should be diamonds somewhere. The title of the film, which I particularly like, is a reference to a letter that the leader of the expedition begins to his wife while on the plane ride over. He forgets to send it back and ends up using it as a combination diary, love letter, and philosophical treatise. By the end of the trip it’s over a thousand pages long and filled with hope and despair in almost equal measure. Our adventurers start out full of confidence and hope but slowly begin to realize that Siberia is vast and there is little hope that they will be the ones to discover the diamonds. There is also a subplot involving a love triangle between three of the main characters; the two young geologists are in love but their guide is also in love with the lady and has also written a letter about it, one that he doesn’t want anyone to see. Eventually they do find the diamonds and begin to head back to Moscow to be celebrated as heroes. Almost immediately, however, nature intervenes with an incredible dangerous forest fire. Suddenly the film shifts into survival mode as the expedition tries to simply stay alive and find their way out, driven by the idea that they have to get a map of the location of the diamonds out, for the good of the Soviet Union.

It’s not the best story ever, but with visuals that are this compelling it doesn’t really have to be. There is enough going on that I was never bored, and the relationships between the characters are very well developed. The film is really broken into two parts. The first is a rather straightforward tale of adventure, love, obsession, failure, and, ultimately, success. It’s focused mostly on the various personalities of the members of the expedition; we learn a lot about what they want from life and how they feel about their roles in the greater society. It’s fascinating to see a portrayal of the nature of community and personal responsibility under Soviet Communism. This is the first non full-on propaganda film I’ve ever seen from this period, and while there is still a certain amount of state deification going on, there’s also some very interesting moments that provide commentary on some of the sillier aspects of the Soviet Union. These moments are incredibly interesting to me as a child of the end of the cold war, these are perspectives I was simply never exposed to as a child. Particularly interesting is a series of congratulatory broadcasts that are coming through by radio, just as our collective are realizing how much danger they have found themselves in.

The second part is an almost totally different vibe. Here we have these people we’ve just learned so much about, and seen at their best, proclaiming their ideals, get put to their absolute limit. It’s interesting to see how the journey and interpersonal relationships play out once things get really bad. The various characters behave exactly how they should given what we’ve already learned about them, but the whole thing also becomes an interesting study in the nature of survival and what drives people to carry on. In this case the main motivations are love for each other and an overwhelming desire to not see their discovery lost. This is also the most incredible part of the film visually. The forest fire seems massive in nature, and looks real to a degree that I have trouble understanding how it was accomplished. Short of learning that Urusevsky actually set an entire old growth forest on fire and simply filmed in it, I can’t fathom how the shots in this film were achieved without killing everyone. There are so many moments that look unbelievably dangerous, and an almost equally large number of shots that are simply so beautiful that I found myself almost happy that the characters were in such peril. This is one of the most visually arresting films I’ve ever seen and it both complements the story and makes it somewhat less crucial that there is a decent one at all. This was an incredibly interesting film that I really, really enjoyed. - Sep 29th, 2014