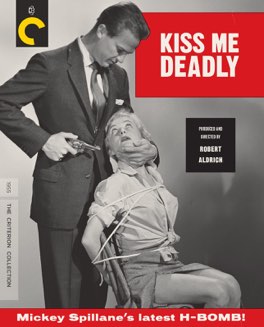 This is not a film without problems, but man does it succeed at it’s goals. It’s an incredibly fun and gritty piece of cinema history, with one of the strangest endings I’ve ever seen. Definitely worth watching if you like noir at all.

Now, this is a charming film. Flawed in so many ways, it still screams of originality and interest. This is classic noir; not particularly well done, perhaps a little too hard-boiled for its own good, but so much fun. Like a poor man’s The Maltese Falcon, only without the overwhelming talents of Humphrey Bogart or Dashiell Hammett to make it really sing. It reminds me a little bit of Sweet Smell of Success, without quite the same sparkling dialogue or over-the-top personality. All of that is to say, this is a fine film, a quality piece of noir, and not much else. On the other hand, it really doesn’t have to be, it does that more than well enough to be worth watching.

The story is straight pulp. Spillane’s great anti-hero Mike Hammer is running around getting into trouble and generally making a nuisance of himself. He’s big, mean, violent, and so dumb. While driving towards Los Angeles one night, he stops and picks up a hitchhiker who has recently escaped from a local mental institution. She’s wearing nothing except a trench coat and tells him that if they don’t make it to LA he should “Remember me.” Needless to say, they don’t make it. They’re stopped by a creepy black car that pushes them off a cliff. She’s dead, somehow he’s made it out alive, and now he wants answers. He starts poking his nose where it doesn’t belong and, before he knows it, he’s deep into a story that’s absolutely unbelievable. Along the way there are numerous moments of violence, some really bad people, some incredibly interesting twists, and one very shocking ending that I won’t even hint at. Before I saw the film I read that the ending was “nervy,” and I admit I had no expectations for what that could mean, but man they were right. This film has as nervy an ending as I can remember seeing for a genre picture from its time. It’s intense, and not at all where I thought the film would go.

The story is great like I said, and so is the cinematography. It’s absolutely classic Los Angeles from the 50’s, so full of iconic shots. It’s generally regarded as one of “the” Los Angeles films and I totally understand why, it revels in it’s sense of place. The essays I’ve seen praise Ralph Meeker’s acting and I’ll admit that it took me the entire film to see why, but in the end I get it. He’s perfect as the dumb brute of a man he’s portraying. I think I’m so used to seeing smart and capable private detectives that it was hard to accept that this is the story of a guy who is just angry and stupid enough to get to the bottom of things. He’s not supposed to have the slick coolness of a Bogart, or even a Ray Milland, he’s meant to be just a big clod running around making trouble with no idea of when he should stop. And he does that very, very well. The only other standout in the cast is Wesley Addy, who plays a tough cop that knows that Hammer is after and hopes he doesn’t find it. Everyone else is basically terrible, especially the women. They are all bad, varying from cloying to annoying with very little in-between. They are so uniformly terrible that I really didn’t even care what happened to them, which makes the ending oddly more satisfying than it might have otherwise been. Most of the acting isn’t great, but it really isn’t a problem, this definitely isn’t the kind of film where that matters.

So what kind of film is it? It’s bold, brash even. I’ve rarely seen a Hollywood genre film that took quite this many risks. It reminds me a bit of a much, much better made The Naked Kiss, without the insanity Samuel Fuller brought to his films. There is a tendency in modern films, especially those of M. Night Shyamalan, to have a “twist” ending. It’s become so common, in fact, that it’s completely trite. We go to those films expecting the twist, waiting for it, hoping to figure it out early so we can congratulate ourselves for own cleverness. But that’s all it’s good for, self-congratulation on our part and on the filmmakers part. This film, on the other hand, has an ending one could call a twist, but it’s so unpretentiously handled, and comes so out of the blue, that it doesn’t suffer from any of that self-aggrandizing tackiness that is so boring in some modern films. It’s quite an achievement, one that I think will sit in my mind for the next few days as I work it over. I’m excited to see how I feel about it then. - Jun 23rd, 2014