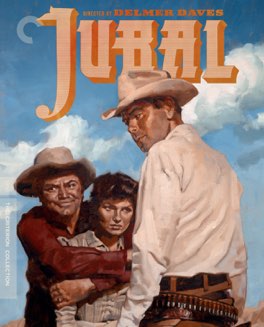 Not a spectacular film, but very solid, and thoroughly enjoyable. It has beautiful scenery and a serviceable story, and I can definitely recommend it.

What a nice little western this was. This is not a monumental film, it’s a small one, but it’s a lovely one nonetheless. Full of pleasant performances, a solid story, and a truly beautiful backdrop.

It’s the perfect genre exercise with a heart of solid gold. It’s hard not to compare it to the truly incredible 3:10 to Yuma, also directed by Delmer Daves and starring Glenn Ford, but it’s really an unfair comparison. That film is an unbelievable accomplishment, one of the best I’ve ever seen, and there aren’t many films like that period.

This one doesn’t even come close to that level, but it’s still very nice and I’m really glad I got to see it.

The story centers on the eponymous Jubal Troop, played to perfection by Glenn Ford, a cattle hand who has a had a very rough life up to, and including, the point the film starts. The first shot is of Jubal attempting to walk down the side of a hill and falling, rolling, finally coming to a stop right next to a road that Shep Horgan, a local rancher played equally masterfully by Ernest Borgnine, is passing by.

Stopping to see what’s going on, Shep takes Jubal back to his ranch, sizes him up, and then offers him a job, to which Jubal reluctantly agrees. We soon learn that this ranch features a bastard ranch hand, one who has a had an affair with the boss’ wife, and who doesn’t like Jubal one bit. This hand, named Pinky, and played wonderfully by Rod Steiger, is instantly jealous of the relationship Jubal has with the wife, and tries to undermine him at every turn.

What follows is a story that’s very reminiscent of Othello, full of twists and turns, and betrayal. It’s hardly a new story, but it’s very well done.

The acting of Glenn Ford has to carry this film, and he does a very serviceable job. He’s not quite as amazing as he was in 3:10 to Yuma, but then the plot wouldn’t really allow him to be. What he is, is a certain kind of character that I really like and respect. He’s honest, solid, truthful, respectful, and decent. He presents the world with a man who can be trusted, and who will do the right thing even when it’s not the easy thing to do.

He has his faults, but he genuinely means well and tries to do right by the people around him. He’s balanced by the three other characters around him. Ernest Borgnine’s Shep is a caricature of the type of well-meaning but boorish man who swats his wife on the rear-end all the time because he thinks it shows her that he loves her. He’s the gregarious oaf who gets along well with everyone but never really does anything quite right. He’s loud and brash and quick to fight, but he has a good heart.

Rod Steiger’s Pinky, on the other hand, is a true bastard. A man who hits women who don’t want to be with him, and then tries to blame it on far better people than himself. A man who cannot be trusted, who would just as soon stab you in the back as help you out. A truly selfish man who ultimately ruins everything around him. And finally Valerie French’s Mae, the classic evil temptress, a definitely sexist archetype of the woman who is only trying to ruin any good man she meets. And she pays the Hollywood price for her pride and her sexuality.

That’s my least favorite thing about the film actually. I try not to judge these things by our modern standards of morality, but there is such an obvious virgin/whore dynamic going on here with Mae and another woman, Naomi, that it’s actually a bit difficult to deal with at times. It doesn’t ruin the film for me, but I could definitely see it ruining it for someone else.

Jubal is an interesting film. It’s certainly not a masterpiece, it has all the flaws I’ve listed and more. It is, however, a very solid genre film that says interesting things about loyalty, and family, and honor, and duty. It’s also so wonderfully well made, the acting is across the board top notch, and the cinematography is truly spectacular.

I think there’s a tendency, especially when dealing with films from previous eras, to completely dismiss all but the very best, and I think that’s a shame. This film didn’t win best picture, didn’t change the world, isn’t spoken of in awed whispers by all those who’ve seen it, but I think that’s ok.

Not every film can be a masterpiece, or change the world. Sometimes what you want is just a solid film, with great acting, a nice story, and a satisfying ending. This film delivers on all those counts in spades. The enemy of a positive experience might be an unrelenting search for something better, never really noticing all the perfectly great things you’re skipping along the way. I think I’m guilty of this problem. I always want the best, and while that’s a good thing, it’s also important to see the worth in everything else.

Of course, the reverse is also a danger, not everything is worth noticing, but there’s a lot of really cool stuff out there that can get overlooked just because it’s only good, not great.

This film reminded me that it’s important to enjoy that other stuff too, even while keeping your eye out for the truly transformative. - Jul 29th, 2014